So, it was a pretty typical case. An offline POS in High Sec, with a few research labs. But this one had a good 15b isk in blueprints. 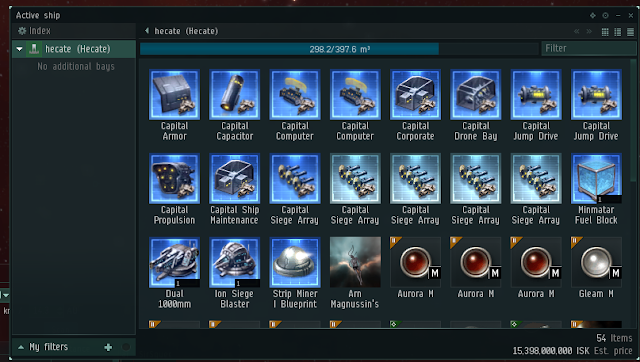 Most of the BPOs were researched to near max, so they are selling for more than the base price. This puts my total isk income from offline POS removal at something like 30b now, over 1-2 years of casual exploration. I feel bad if this player was active and just forgot to refuel the POS. I hope, instead, they just left EVE. Then again, considering they were producing capitals and keeping BPOs in a POS, they probably have more isk than they need. Maybe.

This drop is absolutely nothing in comparison to drops like this 200b isk plus story on reddit a few weeks ago. But considering the time it takes to find an inactive POS these days (you know, with how active the game is and all), it really isn't worth the isk from the perspective of an isk-making-activity. For me, it is comparable to looting junk like melons in fallout games--a habit of an OCD player. I got a virtual shit ton of melons and corn and etc. in fallout 4 for what it's worth. (Which is nothing.) I like "cleaning" stuff up. But running level 4 missions or 4/10 DED sites in HS is likely going to be better isk over time than looking for the rare offline POS or two.

But really, these days, making isk is the last reason to play EVE. Destroying large numbers of isk is also not a reason to play anymore. Let's be frank, there are some heavy, heavy faucets in EVE, where even Titan losses are a minor financial blip. Isk is...meaningless? Maybe not that harsh, but close. These days, logging in depends on content, not isk--gaining, or isk-destroying. If CCP gave every player unlimited isk and max skills, would the content be enough to still log in? I guess, given my goals, I pretty much have both. And I am pretty sure many others do as well.

And I'm still logging in. So that's something I suppose, even if solo PVP lately has been...eh, yeah, that's the word.
Posted by Sven viko at 8:07 PM