In June, my first month making over 10b isk trading, I sold 73 billion isk worth of goods. That means I hauled 73b worth of goods myself, given that I do my own hauling. I've yet to be ganked while moving cargo (at least not since I first started trading and used T1 industrial ships for a brief period, receiving one desperate gank needing two ruptures for a cargo of 110m), though I fully expect to one day see it happen. I titled this post "safer" hauling because there is really no "safety" in EVE--that's why I play the game, after all. I personally enjoy ganking haulers and participating in events like Burn Jita--and think gank-groups like CODE. add interesting content to the game. Even the best tanked ship possible may succumb to a large enough horde of catalysts--if only for the fun and challenge for the catalyst pilots!

So, I thought it might be worthwhile to say a bit about how I haul goods. I use four ships as the task requires:
First, when hauling small amounts of expensive goods, the only sensible option is to use a blockade runner. I don't have anything to add that's not covered in this excellent example of fittings for these ships.

I occasionally--quite rarely--use a freighter. To be frank, there is only one remotely sane* way to fit a freighter:

Three Bulkheads. Why people put anything else on their freighters will always remain a mystery to me, particularly when, looking over the freighter losses on the killboards to groups like CODE., people typically use expanded cargoholds even when they don't need the extra cargo space.

* There are always exceptions, and one exception to this freighter fitting involves using multiple alts to web the freighter into warp quickly.

I typically use an orca to haul large amounts of goods, however. Besides the fact that it is a less-obvious target, why an orca? It makes sense for a number of reasons. First, orcas can field a tank comparable and in some ways greater than a freighter. For instance: 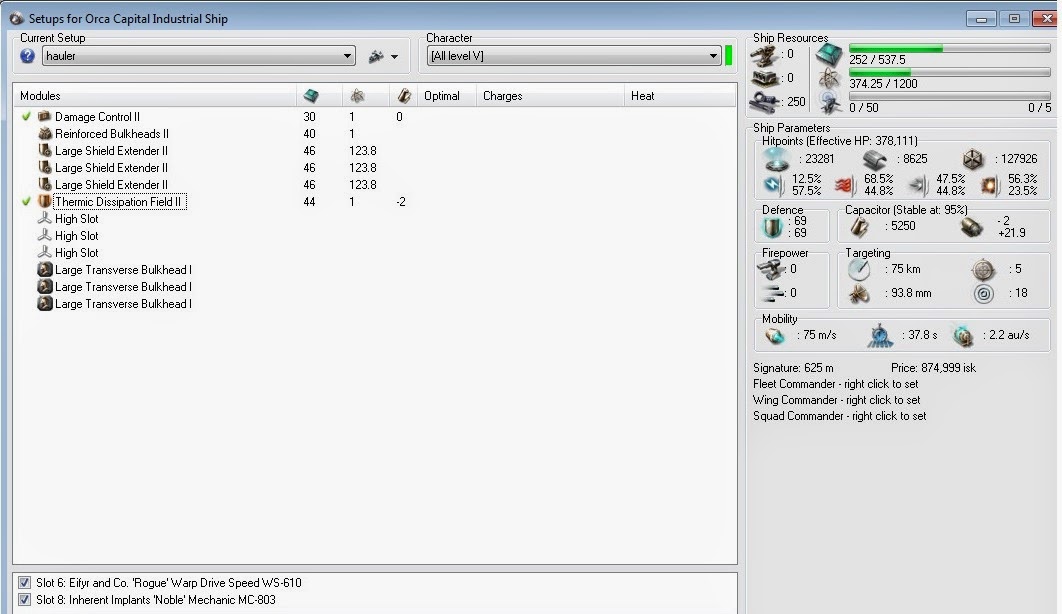 Warps slightly faster, aligns slightly quicker, and has a bit better tank than a freighter--particularly against thermal damage, which happens to be the most common damage type of large ganking groups (via blaster ships like catalysts). (Those two implants are also too cheap not to use when hauling.)

The significant decrease in cargohold is nonetheless worth it when choosing an orca over a freighter, though, for a second reason. Orcas cost about half as much as a freighter, making them far less costly to use--and far less impressive kills. Though groups like CODE. will (and have increasingly started to) gank anything that comes through their system (the Aufay pipe lately), most players like expensive killmails--it makes the preparation of a fleet of destroyers worthwhile--and making the killmail around 600m less is thus worth the trouble. In general, though, for every freighter lost, you could lose two orcas for roughly the same price.

Finally, since Kronos, I've started using deep space transports on some occasions. Their price is on the decline now, and I am really excited about their potential. For one, the fleet hangar can hold a little over 60,000m3, allowing it to carry a battleship--a feat even the orca above can't do. Here is one fit I've been using: 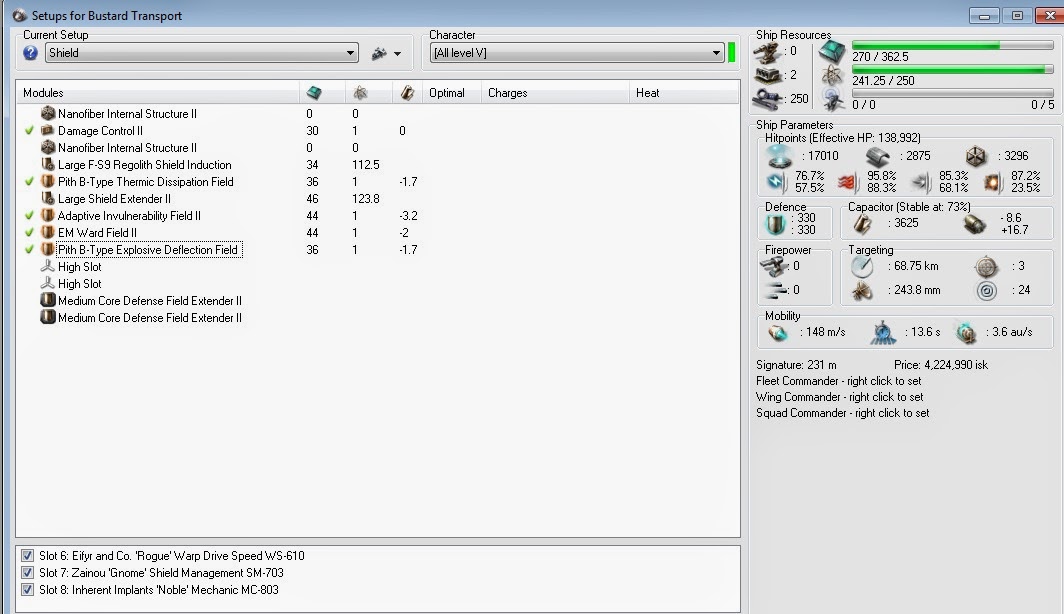 The Pith B-type thermic field is only 4m and the explosive version 18m. The ship is slow to align and warp compared to its blockade runner cousin but much faster compared to the orca. DSTs get a bonus to overheating, which is where these ships really shine. Against thermal damage, the above fit jumps to an insane 1.1m EHP: 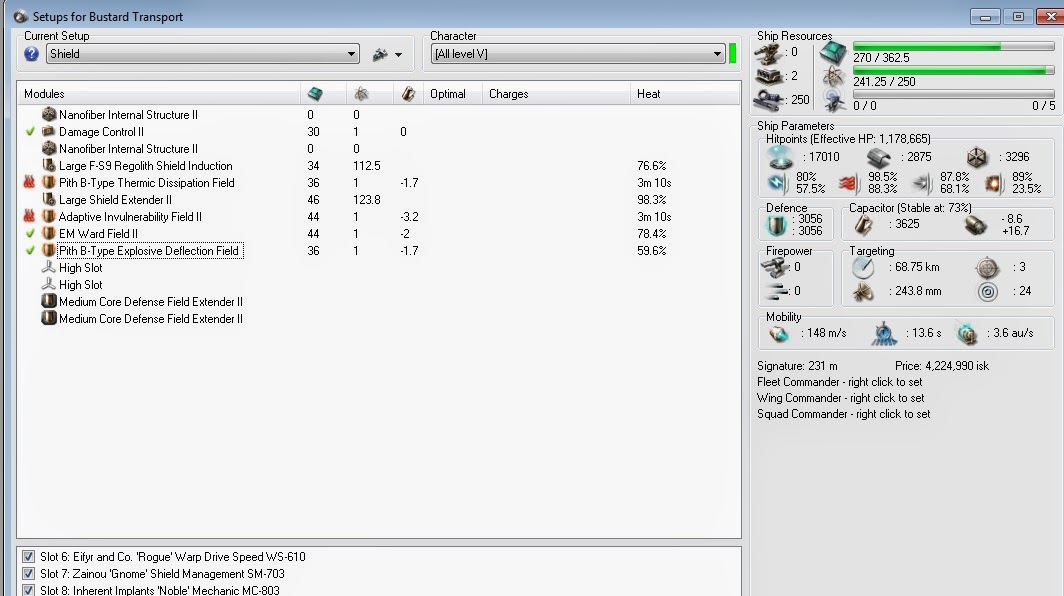 Obviously, the smart thing to do is bring thrashers instead of catalysts for this ship (or throw in a cruiser with a bunch of medium neuts). I am sure there are smarter ways to fit these ships, but for my purposes at least, the above is more than enough. Whatever you do, though, don't fit your DST like this.

Those are the ships I usually use. The how and when of hauling, though, is even more important than the fit. First, and partly aided by my strange schedule, I haul at off-hours, when server population is quite low. Second, avoiding afk-hauling is a must, especially when hauling at prime time and while carrying expensive goods. As I make more isk and when it is the middle of the night US time, I am increasingly willing to auto-pilot with an empty cargohold. A loss mail is inevitable, but I consider it just another transaction tax.
Posted by Sven viko at 7:26 PM