The EVE Prosper blog and show (sadly now on its hiatus) has recorded the recent rise-and-fall of PLEX, and in the most recent episode pointed out the impact "offshoring" is already having on the PLEX market. "Offshoring" refers to buying/selling PLEX at one of the many Fortizar Citadel markets 1 jump from Jita, where taxes are 1% or lower. This is what the PLEX market looks like in the Forge as of 6/3/16: 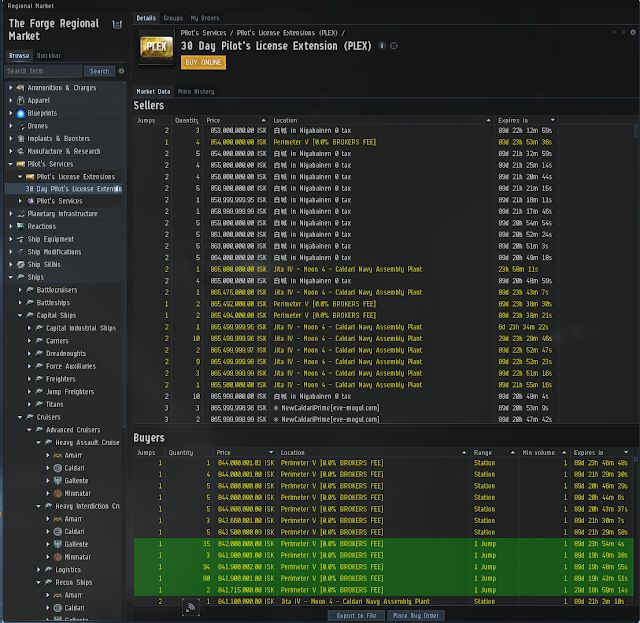 First off, the sky is falling yet again for PLEX prices. 850m? In 2016? I don't think anyone predicted that one. However, just as interesting is that most of the best buy and sell orders for PLEX and Injectors are now at Citadels 1 jump away. In total there are 5 or 6 Fortizar markets 1 jump from Jita, and each has lower taxes and usually better PLEX/Injector orders than 4-4. Interestingly, the worry that a "New Jita" would be created largely turned out false (thus far)--instead, we seem to have Jita, and then dozens of "offshore" markets for high value and high volume items. 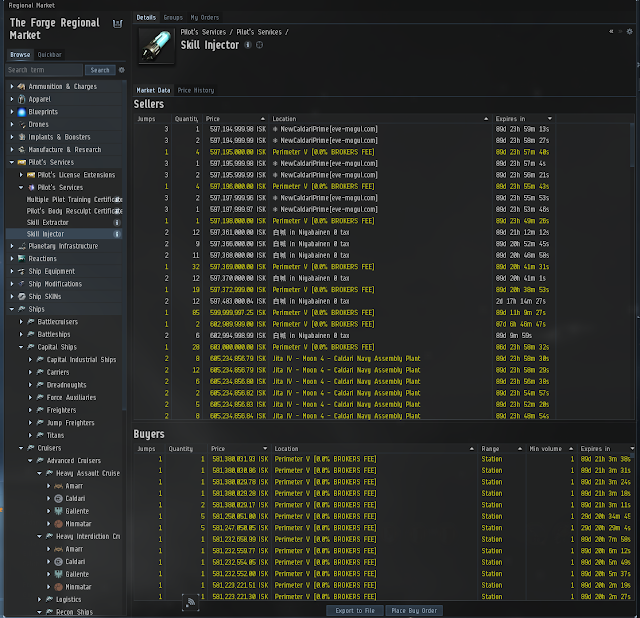 Jita 4-4 does not even appear until the bottom of this page of sell orders for injectors. When you can create contracts in Citadels and so on, they will be even more useful.

Now let's talk about daily SP and the impact it might have on the skill injector market. EVE-Gaurdian has a great write up covering the relative isk value of the 10k SP daily. It depends heavily on your implants and attribute mapping, but for new players it daily opportunities come out to roughly a 15% increase in SP gain for new players.

It is also worth noting that daily SP has a different (higher) relative value for older players (above 60m SP) and especially those who fly in empty clones (i.e. frequently PVP in null for instance). If such a player did the daily every day for a 30 day month, that is 300k SP, or equal to 2 skill injectors (because the player would only receive 150k per SP given their high skills from an injector), which is around 1.2b isk a month in injector cost currently. So the value of a daily is quite a bit higher for a vet player who does no implants PVP; it is two injectors per month or something like 40m SP in "injector->SP" isk value per daily.

Dailies are thus great for new players and even better for veterans, and the upshot is that dailies will likely put pressure off of the skill injector market. There's now a second, more active way of getting more SP faster.

The PLEX market is unstable, the Injector market is good currently (esp. for regional trading) but unpredictable; that all leaves the basic question wide open: Where to now invest isk? In the past, you could dump as much isk as you wanted into PLEX at, say, 900m isk, and make bank when PLEX hit 1b a few months later, or 1.1b a few month after that, etc. As my experiment investing 100b in ships showed, you can make decent return on ships if you buy low and have patience to sell high.

I don't have an expert view on this, but one way to look at investing large amounts of isk is to look at what in game is being replaced--i.e., structures. How much isk exists in POSes and POS modules in space and in assets? And they are all being phased out. I didn't buy a Citadel BPO but I do think it was a good investment, either for producing, selling copies, or researching and reselling. So in the future months/year I am look to the new structures as potential sources of investment, particularly since most POSes in HS are dedicated to manufacturing. Don't take my advice though, a lot of isk can still be made in the injector market!
Posted by Sven viko at 5:56 PM 2 comments: