Last week, while casually browsing through Placid in my beloved Astero, I spotted a Megathron on scan. In a belt. Which could only mean one thing: juicy target. I sneak up, uncloak, get point, and start chipping away with my little drones. It looks like I am breaking his tank, but it will be a while--maybe a long while. And I have a problem: I need to get the bus in 10 minutes. Fortuitously, the player offers to random his ship! We settle on 250 million (which seems high for a vanilla battleship, so I'm torn--I really want to know why he is willing to take the risk on a ransom almost twice the cost of his ship). I agree, and let the player go, for which he is quite thankful. This might not be my first ransom, but it is surely my first memorable one.

That isk ended up going to PLEX for Good. EVE is a funny game.
Posted by Sven viko at 7:12 PM No comments:

Exploring and Trading - Charting My Progress

As I've described in some of my first posts, my alt functions as a trader, explorer, and hauler. She's been exploring for three expansions now, and recently hit 10b in sell orders. Tracking the progress since last January increasingly gives me the opportunity to see the results over a long timescale. 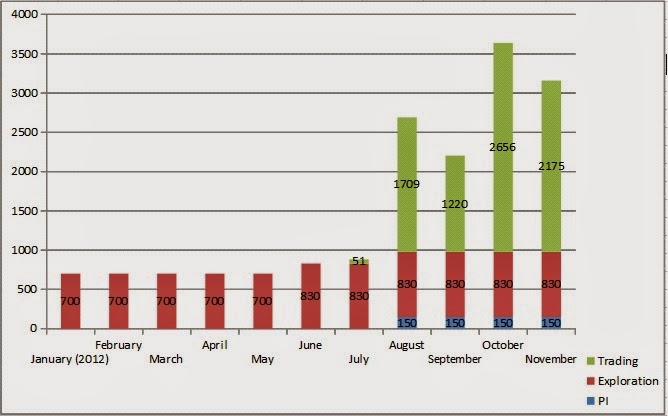 The numbers are in millions. I don't collect exploration results on a monthly basis, for various reasons. Mostly, my play time varies so much week by week and month by month that it is not a reliable guide (for me) to how much I make in general, so I collect the data expansion to expansion.

With trading, however, I'm much more interested in fine-grained analysis, particularly because my play time is not the only big factor in determining profit--market trends also play a large role. For example, in the last five days alone I've made almost one billion--nearly half of what I made in the previous three weeks of November. This is only partly due to an increase in my own play time. There's also, of course, more people playing since the launch of Rubicon. Trading is incredibly profitable during those peak times in player activity before and after the release of expansions, but that's not to say trading at other times isn't worth it (e.g., October had the usual pre-expansion lull in player numbers, but was a great month for my trading).

All of this isn't terribly interesting for veteran traders and explorers, but I'm still charting new ground here and the large-scale data is my main indicator for whether my efforts are paying off.

Assuming the next expansion releases in early June, then, what are my goals for the next 6 months?

For exploration, I hope to bump up the monthly average to 900m while also decreasingly my actual time spent exploring, primarily through skipping data sites and most relic sites and sticking to combat complexes. This goal is already looking feasible, as, thanks to Pilgrim in Exile, I've started making a lot of isk off gas sites, once I realized I could scan the containers and hack them only if they contain expensive items. Further, the low end DED sites just added to low security space have already proven profitable for me.

For trading, I'm on track to hit 20b in sell orders by early March, and perhaps 30b by June though that's a bit more of a stretch. I'm not yet sure when I will stop investing in my regional markets and turn to, perhaps, other long-term but less time consuming investments. 20b in sell orders might just be my limit for how orders I want to restock and update. Until I come to that point, though, I still have more I want to add to my current markets.