Market Trading in EVE Ascension (or: grinding past 500b, setting new goals, maximizing efficiency, and some ideas for Alpha trading)

The last time I posted about market trading, the Citadel expansion had recently been released and offshore Citadel markets were already helping drive down the prices of PLEX and injectors. PLEX in early June, 2016, had fallen to an incredible 850m isk: 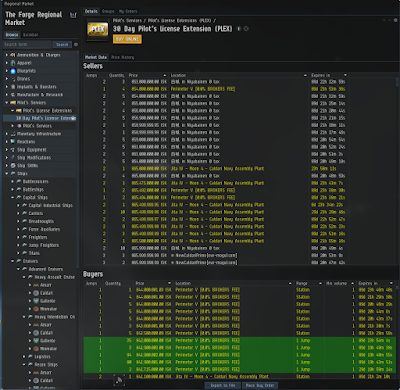 Daily SP rewards were implemented (remember when EVE had dailies?), offering around 300k SP a month if the played logged in every day to collect the reward, which put some downward pressure on the injector market while also lowering demand due to being an additional way to gain SP. Since then (over the last 8 months) PLEX prices slowly climbed back up to over 1.2b in November, and have since plateaued at 1.05b. 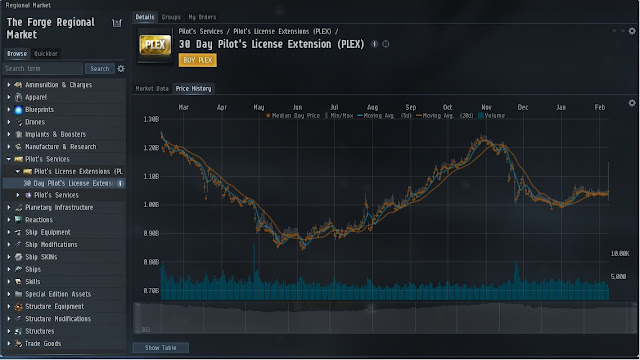 In spite of the massive economic changes that EVE has seen over the past few years--skill trading, Citadel markets, free-to-play, and so on--PLEX still follows a predictable path. However, PLEX is not where I've made most of my isk over the past few years, and I've only bought when it has dropped below 900m or so. Instead, injectors have made up around 40% of my trading profit over the past year. 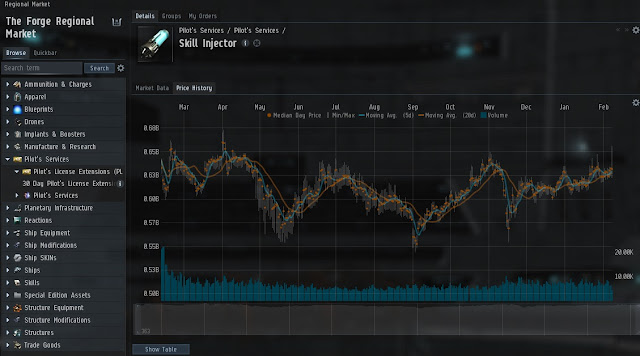 Buy them low--ideally sub-600m--and sell them high--ideally over 650m. Since I do regional trading, incorporating injectors into my casual market took little added effort. The last time I posted specifically about my market trading gameplay was March 2016, the first month seeing skill injectors in game. I hit a record 33b isk in profit that month--on one character and just 300 market orders. Where do I stand now? Here's a really vague chart of the profit. This only includes my main trading alt--it doesn't include trade on second or third alts that I occasionally add, nor does it include special projects I've done, such as Thera trade, or more recently Alpha clone trading. 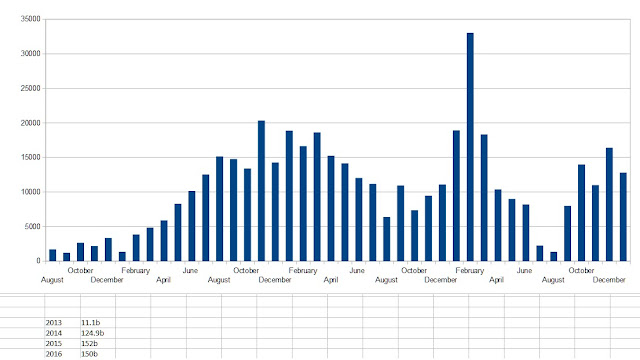 March 2016 was a proof-of-concept: How much isk could I make with just 300 orders? Turns out, I made about 105m isk for every 1 order. However, my goal in EVE isn't to make as much isk as possible. My goal is simply to have as much fun playing EVE when I log in as possible. Isk value is relative: Is 100m isk a lot per month? 1b? 10b? 100b? It depends entirely on your playstyle. However, time is (largely) not relative: Every player only has, at most, 23.5 hours a day to play EVE. We might all have different playstyles and we might all value isk differently, but an hour for me is just as long as an hour for you, and we all have an upper-limit on how much time we can play (and for many of us, obviously, it is far lower than 23.5 hours a day! Or even 23.5 hours a month!).

That all said, my goal since I started trading has not been to make as much isk as possible. Instead, my goal over the past 3 years has been: Make as much isk in as little as is time possible. So, while my average isk per month has not substantially changed over the past few years, the time I spend to make that isk has drastically plummeted. In 2014, I estimate I made around 300m isk per hour spent maintaining my regional markets, or around 10 hours per 3b isk, or around 30+ hours a month to maintain my 10b monthly average during this year. That's actually quite a lot of time spent, even if it is better than many other activities in EVE--especially if you compare it to what good station traders make. It took me time to find items to trade; it took me time to find where to sell the items; it took me time to haul the items in low amounts since I did not yet have the best ways of hauling available; it took me time to list the items--and so on.

Fast forward to the past 5 months (since July-August, when I was unable to log in much). I have continued to average over 10b isk a month trading (on my one main character). However, I've also kept track of how much time I've spent to make this isk maintaining my market and occasionally station trading in Jita: Around 4-5 hours per week (usually split into 2 2-hour play sessions per week). So, I make around 700m isk per hour spent trading (maintaining markets) now. My profits have largely not increased, but my efficiency has. And since I largely value my time more than I value my isk, that's the improvement I like to see.

In total now, this means I've passed the 500-600b isk mark. About 450b of that is from trade on my main trader, but around 100b or more of that is from destroying offline POSes (another update about this coming soon!), and then around 50b isk or so from exploration.

Finally, I've started a side-project since the release of Alpha clones. Can you make decent isk doing trade on Alphas only? They are very limited in total market orders, making regional and station trade fairly painful, and you can only have one Alpha logged in at once. However, there are two ways I've made over 2b isk in a month with Alpha trade.

The first involves using 3+ Alpha traders and taking advantage of limited edition items. Remember back when CCP released the Sunesis? I set up low regional buy orders on 3 Alpha clones in distant regions (Solitude, Syndicate, Placid, Stain, Curse, etc.). I managed to get a few dozen Sunesi(?) for less than 20m isk, and resell them for around 40m in the following week. The most time consuming part of this, though, was hauling the Sunesi. Instead, I decided to simply relist them a month later in the same regions for 3x the price, and have sold a few this way. So, my first tip for Alpha clone trading is to use your small order amount to trade in limited edition items. This is relatively time consuming and I much more so recommend a second method.

The second way I've done Alpha clone trading is buy selling high value, slow-moving items in null sec markets.
1. Join a large null sec group that trains new players, such as Karmafleet, Horde, Brave, or Test. This is a great idea for Alpha players anyway, since joining such groups is often the best way to learn EVE.
2. Once you have your first billion or so isk (I know this step isn't very practical, but you can easily make 1-2b isk in such groups doing anoms in a VNI or running data/relic sites in your null region). Start buying high value items in Jita that are not listed in your local null sec market. Don't price gouge, because your alliance will hate you, and also because you will either get undercut or not see sales.
3. Repeat step 2 until you hit your order limit, then consider going Omega and getting better trading skills, or adding another Alpha into the alliance for more market orders.

I know steps 1-3 are not very enlightening by themselves, so let me give you some examples. Finding good items is 90% of the work. The other 10% of the work is hauling the items, but the best way to do this is to search for high sec wormhole connections to your space (such as while searching for data/relic sites). Injectors are a no-brainer, everyone loves injectors. 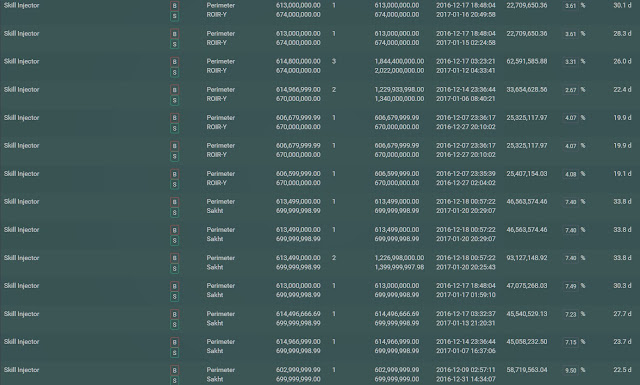 Here my alt is selling injectors in two NPC stations--one in Aridia, a common route to Delve and Fountain--and the other in Venal. Selling in your respective alliance's own market hub is an even better option usually. The margins won't be as great but they will move faster, and you will be nearby to update or restock as needed. You can do this with many other items as well: expensive skill books, expensive T2 ships not in supply locally, and so on. Look at your alliance's killboard and pay attention to the expensive stuff that dies. Does it have faction mods, tech 2 rigs, or rare modules fitted? If so, are they in stock in your local hubs? If not, stock them. This works with NPC stations in null and low sec as well. Overall, though, I would recommend exploration for Alphas looking to make isk over any other activity, and trading as just a side-gig.
Posted by Sven viko at 12:02 PM No comments: