Random Stats After 5 Years of EVE

This screenshot perhaps more than any other 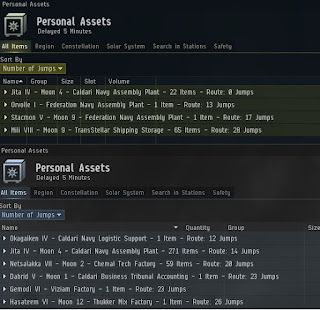 paints an OCD picture of how I play EVE. After 5 years of playing I have kept my assets on both accounts (trader top, Sven bottom) extremely organized. Really, everything except ships I am currently using for PVP or exploration are in Jita 4-4, and when I want to PVP in a new area I simply haul from Jita using a DST or Bowhead, then move all of the remaining stuff back to Jita when I head elsewhere. Some players have the complete opposite asset list and organization, with ships and items spread across hundreds of systems. Nope, can't do it. Even this many stations with assets starts to bother me...

Most Active PVP Sytems by Space:

Most Active PVP "Location" (since added to killmail info in 2015): 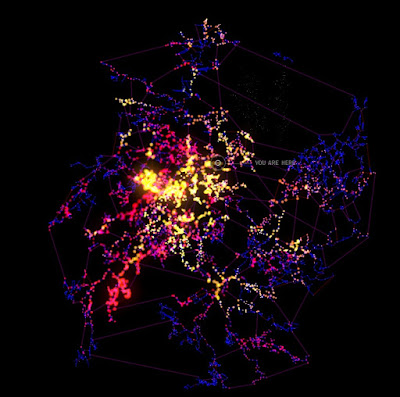 In June I hit 100m skill points and 4 years of PVP activity every month. In just a few days I will hit my 5 year anniversary of playing EVE. However, this summer was also my lowest period of activity in 4 years. I did a few solo roams, a few public fleets, updated market orders a few times, and that was about it--a very stark contrast to the fall and winter of 2015 and early 2016 which were my most active months ever. It's not so much that I was tired of EVE, but a few reasons led me to need a break, reasons which probably resonate with many players that share my playstyles.

Even though I don't experience lag or latency issues in any other online game (and experience very low ping and a stable connection), my last year playing EVE has been a constant battle against disconnects, bugs, and socket losses. On an average play session I will experience roughly 1-2 disconnects, sometimes many more, even while my internet connection is otherwise stable. (E.g., on a casual roam through null I typically experience 1-2 disconnects every hour.) There also seems to be a rising number of bugs in the game, some of which affect my playstyle. For instance, the market window frequently "desyncs" when selecting a new item listing, updating the item listing but displaying the previous item's buy/sell orders. It definitely tilts me when I die on a roam due to lag or disconnects, though in some cases it results in funny fights such as in this video (one of the only EVE pvp videos I've made).

One of the best things about being involved in solo PVP is that you are your own FC, and do not rely on others for creating content. Yet, in another way, you are entirely dependent on others for content—you rely on people actually being in space. When the average number of players drops below 20k, you feel it acutely. The time in between fights—or even seeing another player in space—has steadily increased over the years I've played EVE. These days, even at prime hours, many systems are empty--systems that in 2011-2013 were very active--and few that are flying in space are looking for a fight (or, if they are, they are looking for an easy killmail).

Some roams I encounter more people afk at gates in null than I do solo or small gangs looking for a fight. Solo PVP has always been a niche activity in a niche game, but I feel it is hit particularly hard by periods of low player activity. When the game is buzzing with activity, people solo more; when it is stagnant, I think people fleet up more. This is true even for me: my main PVP activity over the past 3 months has been from Zarvox's amazingly fun Saturday interceptor fleets.

Things haven't been entirely terrible; I've found solo fights here and there, such as a roam in a ferox where I snagged a blingy rapier, then took out 2 svipuls and a sabre before dying to the 6+ other svipuls in the gang. It was fun, but finding such content just takes so long these days, far longer than I often have time to play for. I am definitely roaming more lately as activity increases as EVE nears the major November release, but my feeling is that the amount of relatively inactive months out of the year is growing. I hope that trend reverses.

My other main activity is the market, and it, too, suffers from low player numbers. Sure, my PLEX stack has risen in value over the past 3 months from when PLEX was sitting around 800-900m (see my previous post!), and I still make a decent profit from my local market trading, but the markets over the last 3 months have simply been boring. Little activity, little velocity in isk, little speculation, and slow turnover. Again, the November release should reverse this trend, with new structures and the Alpha clone option coming.

3. The glacially slow balance progress, even by EVE's standards

The balance pass on T3 destroyers, link changes, Citadel improvements, and other balance updates were originally planned for a summer release, and instead mostly got pushed back to late fall. Announcements at 2016's fanfest were largely for features we knew were coming (with some, like some of the aforementioned, planned for summer, then pushed back), and the year's major focus on capital rebalance was a ton of time for little gain. According to zkill data, carriers are involved in almost 2x more kills than last year, but lost at around the same (or less) numbers. Dreads are roughly used (in kills and losses) the same amount. Remember, CCP's explicitly stated goal was to have capitals used more, and lost much more often, so they at best failed on half of their design goal...the more important half, from my perspective.

I support CCP's decision to move back to expansions, yet am disappointed with how little balance work 2016 will see compared to every previous year I've played EVE, where dozens of ships across multiple classes were rebalanced in interesting ways for each expansion. From my perspective, it is better for the game to make frequent small balance passes even if it results in some ships being overpowered and others underpowered, than it is to have few balance passes and a stagnant meta for long periods.

These days, the ship balance team (only about 3 devs, remember) is spread thin—they also work on module and item balance, structure design and balance, events like the AT that take months of preparation, and new and important (/s) ship designs and releases like faction capitals that 1 or maybe 2 players will regularly use. This has left ships like the Svipul and weapon classes like ECM and Rapid Lights in dire need of even a quick balance pass—just lowering a few numbers like base speed on the Svipul would have been a fine temporary patch—for around a year. Sadly, the solution seems to be that CCP simply needs more developers, and for that they need more players.

The events CCP were incorporating in between their rotation of expansions at first showed promise. The success of the few first events in 2015 like the Crimson Harvest were based, I think, on the good rewards, the ability to run the sites in almost any ship or fitting, and the benefits of running the sites in dangerous space. I had a few great fights (some win and some lose) in low, null, and wormhole space running these sites or catching someone running them. Later events, though, jettisoned these elements and opted for more of a slow grind in sites designed for mission running ships, culminating in the Shadow of the Serpent Event. I truly did try to enjoy the event, even getting to the first tier “chest” unlock, but the event lacked any potential player conflict and took a monumental amount of largely afk grinding to progress. My disappointment was widely shared by players, especially since the event turned out to be the only real content over the summer months. The more recent Purity of the Throne event was an improvement, and I really appreciated getting an entire skin set for Amarr ships, but the event did still lack the conflict drivers that we saw in the first few.

Am I hopeful for brighter days in EVE's future, days of 40k average players logged in, better and faster balance and bug passes, and tons of people to fight? Definitely. I am hopeful that the “freemium” mode coming in November will bring in a large chunk of new and returning players to the game. I would love to see the average number of players double or triple in November or return to 2010-2014 levels, and stay that way more permanently this time. I believe EVE is a good enough game to deserve far more players than it currently has, and hopeful that the Alpha clone option will be enough to hook many new players.
Posted by Sven viko at 12:27 PM No comments: