Way back in 2014 I stumbled upon an offline POS in high sec, owned by a corporation that, by the looks of it, had long since gone inactive. Being new to POSes, wardecs, and structures altogether, I decided to see what would happen if I declared war and attempted to blow up the structures. I learned a ton, and actually made a bit of isk, and in the process I started one of many side-hobbies I have in EVE involving combining traditional exploration with hunting for offline POSes.

I also had this silly completionist goal of visiting every system in EVE at least once, a goal that combined well with doing exploration sites and looking everywhere for POSes. Fast forward a year or so, and I had visited every system in High Sec at least once, and made many tens of billions on loot found from destroying starbase modules like Ship Maintence Arrays, Laboratories, Assembly Arrays, and even Reprocessing and Compression Arrays packed for of ore/minerals. I learned a ton about the game in the process, listened to probably 20+ audiobooks doing this casual exploration, and amassed over 1k kills on my Stratios I used for the activity. This activity also caught on, and I learned of many players who had even better success than I did at destroying POSes. (For example, check this group out: Mischief Managed. They were finding and destroying so many offline POS mods for a few months that I basically couldn't find any. I have no idea how they found so many, so quickly, and over such a large area.)

When I ran out of systems in High Sec to visit, naturally enough I've moved to searching and exploring Low Sec and now Null in 2016 and on. This actually works well, because that's where I PVP most anyway. I created a POS Mods dscan tab and started using it in every system as I roamed different regions. I was surprised to find quite a few offline POSes to pop just from checking dscan. One day passing through Heydieles, for instance, I noticed the moon mining POSes had gone offline--all 13 of them. 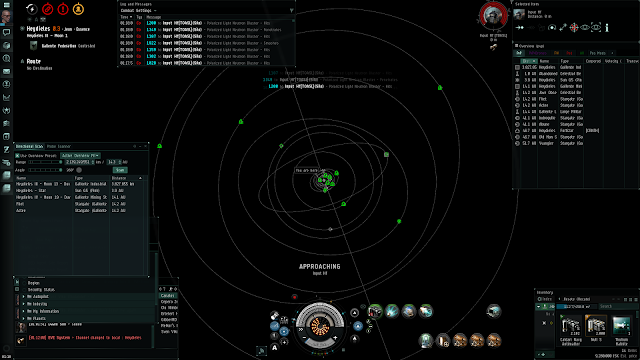 This is likely going to be even more common over the next 6 months, partly because POSes tend to go offline during the "summer slumps" in EVE, but more so because CCP has announced some of the penultimate plans for phasing out old POSes. I'll talk about that more at the end. In this case, I fortunately had a 1k DPS Hecate nearby to quickly pop all of these moon mining structures. My hauler only collected around 500m in moon goo, so it wasn't really worth it. I expect in many cases owners of large-scale moon mining operations will simply let their farms go inactive, rather than undertaking the massive hassle of collective all of the remaining goo and modules.

In other cases in LS/NS I've made a bit more isk in my finds, putting me closer to 100b isk made from the activity (not that it is great isk per hour, keep in mind!). This SMA dropped a few hundred million close to an NPC null station, and my "jackpot" so far was around a billion isk in capital blueprints and materials from this offline cap production POS: 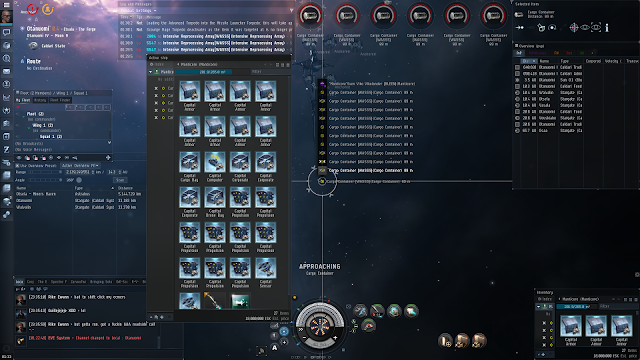 Here is my super-sophisticated map and checklist of regions I have now fully visited: 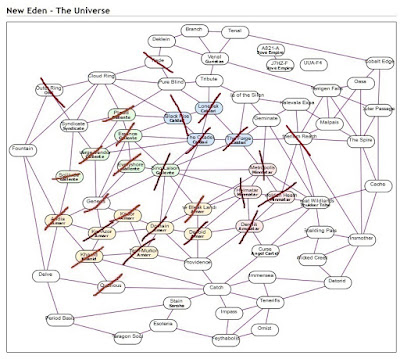 HS and LS are fully covered, but I still have many small patches in many NS regions left to go. I think I will tackle that during the "summer slump" when action dies down elsewhere. Maybe I will find a few more final offline POSes to give this playstyle a final sendoff for me before POSes are removed. But this side-hobby I've had in EVE is largely at an end.

So what of the future? CCP has announced plans for phasing out structures: In May, starbase production module BPOs will no longer be seeded, and in August POSes will no longer give such bonuses to industry. Moon mining, reactors, and refineries will be disabled when the new Refinery Upwell structures are released sometime in winter of 2017, probably November. According to graphs released by CCP at fanfest, we've already seen a massive decline in the number of POSes used for industry (more on this in a future post).

The first few weeks when the new Refineries are added and the old are disabled is going to make for a very interesting scramble across LS/NS to re-establish moon mining operations, and potentially for new and smaller parties to get involved. (Some solo/small group players like Delonewolf have plans to try out a Refinery. I may give one a go as well.) I think it could mark a shake-up in LS. Potentially, it could allow for many smaller and some more industry-focused groups to carve out a piece of LS moons. Potentially, too, it could mark a transition of the Big Blue groups in LS to adopt a renter-style model of moon mining. I don't see Shadow Cartel doing much mining, but I do see them considering outsourcing the mining operations to a new style of LS renters.

Based on what CCP has said, I think we can expect POSes to be fully removed sometime in 2018--maybe summer or maybe winter. However, I think the main conflict drivers/content creating changes will be:


1. The completely new way in which groups will have to run moon mining, and

2. The conversion of outposts to faction Citadels. I think this could lead to a bunch of local wars across null in the weeks before the winter expansion, and could make for some super interesting content if large groups decide they want ownership of some or many of the faction Citadels.

The switch to Upwell structures means the burden is on them now--and not POSes--to provide a lot of content, and due to the long and off-timezone timers they are unfortunately not creating a lot of content. Many questions were asked about this at fanfest and CCP voiced some disfavor with how punishing the 3-timer, off-timezone system for structures is at the moment. A huge amount of conflict could be created if structures had slightly better self-defenses but, say, one less timer.

I am currently doing a small study on Citadel ownership and activity using data I am gathering myself. In upcoming posts I am going to talk about their current vulnerabilities, destroying them solo, and stuff like that, and later in the winter I will post more about the potential for solo or small groups to make use of the new refineries.
Posted by Sven viko at 2:07 PM 5 comments: