In the first half of 2017--the last time, for the foreseeable future, I would be working from home--I did more solo roaming than I ever have in my 6 years of playing EVE. I took advantage of my flexible hours and lost about 20 ships in solo PVP per month (you know you are a solo PVPer in EVE when you measure your success by your monthly losses). That's, comparably, not very much for many active solo PVPers, but a lot for me given time constraints. I primarily roamed the north, from Verge Vendor LS to Pandemic Horde NS space and surrounding areas via the rarely camped RQH entrance. Later, I returned to Thera and roamed null if there were decent connections. 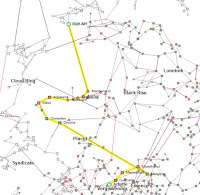 I would say 50% of the time I roamed to northwestern null I got good fights before getting blobbed into oblivion (thanks, of course, to all the people and groups who've PVPed me!). Many of my best fights were against players or groups roaming Horde space, not from Horde themselves (I often compare fighting Horde to fighting Concord. You can snag a few kills but it is hard-programmed into the game that you will die). I have dozens of fights recorded on OBS and I'd like to someday edit them for youtube, but this post is about something different, it's about what I constantly encountered on my way there.

While solo roaming as much as I could before taking on a more normal working schedule, I was "staging" from my market hub in Jufvitte, High Sec. I saw many of the same people in space in HS, from EVE UNI to war deccers preying on (or dying to) EVE UNI, to afk miners, to mission runners. I saw dozens citadels and ECs go up each week, and dozens go inactive. There was some local conflict--such as EVE UNI's wars against HS "war deccers" and their POCOs--but not many.

I love the concept of "local conflict" in all areas of EVE--the idea that a group of players (sometimes new players, sometimes vets) can live in a location in some area of space and consider it their own, and run into conflict with another group of players who live there (or want to live there) and compete for the limited resources. "World wars" in EVE are cool--such as the currently dubbed "blue donut war"--but often the small conflicts have the more interesting stories, and content that does not escalate to massive super/capital brawls. "Local conflict," though, almost always requires competition over limited resources, and as a result I am a huge proponent of CCP always looking to add limitations to resources. Single systems that can sustain hundreds of players, for instance, stifles content. POCOs are limited resources, moon mining refineries are/will be limited resources, market hubs are relatively limited resources, and so on. Are there stories of a small (10-30) player corporation waging war against another small local group in competitive for some resource? It happens occasionally in null--although small, unaffiliated groups are almost nonexistent--but not often. It is also rare in LS and HS. Perhaps it is most common in wormholes, where two small groups might compete for a specific hole. I wish I knew more stories of local conflict, in any case.


I am a strong advocate of creating the content you want to see, rather than passively sitting by waiting for a war to develop. In the spirit of "creating the content you want to see," I've tried to do as much as possible as a mere solo player, and often with the goal of creating conflict or interesting content. I took my own POCOs, I destroyed starbases, I put up my own market and industry hub (more on this in the next post). Solo PVP itself is a way of creating content--sometimes for myself, usually for others.

One day in mid summer, I was using an alt to ship scan citadels and ECs to record which were active, which had services and modules fit, as part of my citadel/EC research project (more on this next). I noticed a Proteus slow-boating off the undock of my Azbel. 30 minutes later the Proteus was still there, off-tether, so I ship scanned him. 6b in modules fit according to EVE Prasial at the time; a paper-thin mission running active tank that could be killed by three tornados or, maybe, 5 thrashers. I had neither. But I started paying attention, combat scanning and ship scanning all over, and AFK players in expensive ships were everywhere. And I thought: someone should take advantage of this.

Well, I did. The kill itself isn't really important--though it is always nice to make isk off PVP--but it got me thinking about how much content is out in space, waiting, drifting around, and how much could be created.


Lifeblood brings new content, new structures, new mechanics, and (maybe) new opportunities for conflict. Will Lifeblood's change to moon mining bring more "local" conflict? Will it bring conflict at all? This remains to be seen, for one based on how unevenly distributed the moon minerals are, and two, based on the overall supply refineries provide. Here, then, are my current ideas for creating content and conflict:

1. What if someone created a public freeport refinery in low sec on a moderately valuable open moon and made the moon extraction timer public? Assuming the price of the M refinery drops to sub-600m then dropping a bunch of refineries all over LS and making them public wouldn't be too costly, and might make interesting conflict when/if people try to mine the field. Or, at least, it would give groups something to blow up, which would give other groups an opportunity to counterdrop. So, the first idea I have for creating content is to put up a bunch of freeport refineries in active LS and make the extraction dates public. At the very least--if no one comes to mine or even destroy--I guess I will have to train some mining alts and grab the valuable goo. Win/win?

2. Are there ways of exploiting the new mining sites? Some players were at first unhappy that ganking miners in the sites would be near impossible with the sites having a small cap on who can enter--almost "instanced" PVE areas. I am not going to let that stop me, and in the spirit of EVE even if it is not profitable or sensible in any way, I will find a way to gank miners in these sites--just on principle. However, are there ways of exploiting mechanics in the sites? For instance, can the Orca be killed? Can the friendly NPCs that help players be killed? I need to test this. For science.

3. Pirate Forward Operating Bases. One of the more unknown parts of Lifeblood. Will FOBs, if left unchecked, disrupt high sec life in any meaningful way? You can see they are already being run in HS because they generate loss mails, collected here. You can also keep track of players these NPCs have killed by looking at the HS losses for blood raiders and guristas here. There is a fantastic write-up on reddit about how Spectre fleet destroyed the first of each type. Ganking groups that attempt to run the sites might be a possibility--if, that is, anyone ever regularly runs them. There's a possibility a very bling marauder can solo them, which is something I may consider testing out.

Oh, and way back in 2014 I was up to a 2.6b isk bounty. After years of hard work (dying), I have finally reduced that number to zero. Kinda bummed about it actually.