Market Milestones: A 40b isk Month, Progress Past 600b, and a more interesting Economy

I was feeling nostalgic this week, reading some of my original posts about market trading back in 2014 when I was just playing with a few billion isk and a t1 hauler. I'd haul things like 4 stealth bombers and some damage controls to a faction war hub or system that bordered null sec, and was amazed when I was able to PLEX my accounts via isk in just the first month. Almost four years later, and I still find the markets in EVE an incredibly fascinating experiment, and still tune into Delonewolf's weekly EVE Talk when I update my orders, or Roedyn's Station Trading twitch stream (and still really miss EVE Prosper's weekly show, RIP). Nowadays, I'm more interested in the market and economy-qua-experiment than I am in making isk. But, the isk basically makes itself, often in spite of my terrible trading habits. When I first wrote a guide to regional trading, I wrote:

That's the catch with regional trading: it is very long term and heavily dependent on how much
you invest into it, particularly if you do not want to micromanage your markets.

We hit 600b in total profits this month (that's like one good weekend for Rita Jita). I'm probably the worst trader in EVE, like an economist who is personally terrible at investing or making good economic decisions. Nah, I like the theories, the meta-, the meta-meta- questions, the social psychology and virtual world that is the game's economy, and I have Ramen Noodles and boxed wine for dinner (a wild weekend for me in EVE is losing a few ships in solo PVP).

A 40b Isk Month in May - How it Happened


My prior record for profits in one month was 33b back in February 2016, the month skill injectors were released. Last May I hit 42b due, this time, to PLEX (with a bit of help from working from home that month and having more time to play): 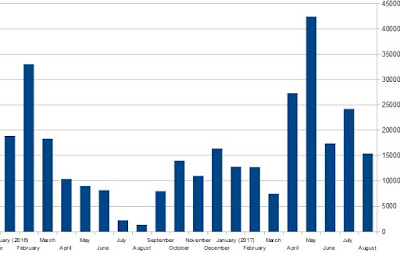 May's breakdown was: 20b from PLEX, 22b from normal regional trade. Of that regional trade, around 8b was from the Jufvitte market hub project, and the other 16b from the rest of the regional market hubs I stock here and there. With no traditional summer expansion and a rather deep "summer slump" in activity, I am honestly surprised I made so much casual trade profit in the quiet summer economy. From August to August, this puts me at around 200b for the year.

The top two splits in the pie chart breakdown are plex and injectors, at around 32b each (aka 32,000 million), while the rest of the profits are distributed fairly even across various items sold at regional hubs. If you can buy plex or injectors when "low" and sell when "high," it is free isk--but how do we predict when the are low and when they will be high? In 2017 it was easier than usual. 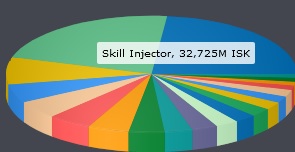 The PLEX split was announced in March, and released shortly after, putting upward pressure on PLEX prices for a few reasons. Sheer speculation was probably the main driving factor, but the split and removal of AUR increased the uses of PLEX itself. The lack of a traditional summer expansion being released may have also contributed to the PLEX rise, as there was not a large influx of players trying out or returning to EVE and buying and selling PLEX to jump start their play.

Ghost training was increasingly discussed on the forums and r/eve and used as a main example of CCP's slow reaction to game-breaking bugs, mechanics, and exploits. Most people assumed CCP would imminently remove it, but it wasn't until June that it will formally declared an exploit. Yet this caused massive speculation on both injectors as well as PLEX, as some SP farmers tried to liquidate their stocks while many others invested in injectors for the inevitable spike.

What will the RMT markets do now that "winter is coming," with the large (and only) expansion of the year coming around November? Adam4EVE's graphs on market trends suggests why I think both plex and, following, injectors will rise. PLEX volumes spiked in mid-late summer with a massive PLEX sale, reigning in the spiking price that seemed to be fast heading to 4m per unit.

Now that the volumes of PLEX are dropping back down, the price is slowly climbing back up. Barring another huge PLEX sale from CCP in winter, I'd expect PLEX to slowly resume its climb to 4m per, or 2b for a month of game time. The only game change I could see stopping this would be a change to 0% tax market hubs or another nerf to anom income. The former change would lesson the ability to manipulate RMT prices without real cost, while the latter would reduce money supply. In the past few months, isk from bounties has dropped by 10%, while money supply has only plateaued. I would pay close attention to both graphs in the August and following economic reports (and sales from CCP), but from the looks of it, I'd say PLEX will be near 4m and L injectors close to 1b in early 2018.

In August I was mostly unable to play EVE. Traveling and moving left me without a computer that could run the game. Yet I still made 15b or so. A large reason for this was rapid price changes across the economy--too many interesting changes to discuss. For instance, T3Ds doubled and for a few days tripled in price, and were reliably selling at those percentages. They sat at 30m almost all summer and each month I stocked up on more. Investing in them was a no-brainer: they are used tons in large fleets (e.g., jackdaws), as well as solo and small gang, as well as in PVE (exploration, wormholes), and some of their mats are used in other ships that were getting re-balanced. So, if you are wondering what to invest it for the upcoming winter expansion (or the next summer or winter expansions for 2018 if you are feeling really speculative), think about the following formula: What are materials or items that are already good to trade, which will be more in demand with higher player activity, which may also see a period of low supply as producers or gatherers work to catch up to demand?