Some Good Places to Trade

In my past posts about trading, I've described a lot about how I trade, where I trade, and some of the "successes" I've had (or lack thereof). I posted about trading in Thera, which was a lot of fun and surprisingly profitable. However, trading for a year and a half now, I've done a lot of research on potential markets that I now do not plan on trading in, as well as a few I've left. So, in this post, I am going to offer a few examples of places that suit my trade style, and why I think these are decent areas (based on my way of trading). Maybe someone will find it helpful.

Of course, as many of the better traders and "market gurus" could tell you, there are probably much more optimal ways to trade, but here are the basic features of how and why I trade the way I do:

1) Since I hate updating orders, I do not trade in major hubs, and I look for market locations that are not too competitive. I look for locations and items that will only need updating once or twice a week in order to see decent turnover (e.g., see my posts about trading in Simela).

2) I buy straight from Jita/Amarr/etc. sell orders and do my own hauling.

3) I only trade on two characters--so, no army of alts that can update orders.

With those conditions in mind, the way I look for potential areas to trade is fairly straightforward: I look for areas in HS, LS, and sometimes NS, that have a decent amount of players active in that system/region, but lack a market hub in the top-20 as listed on eve-marketdata's list of stations by trade volume. That list is an good resource to start with, but the best resource is simply experience living and trading in a region. I would avoid stations in the top-20, as they are, I've found, highly competitive and not conducive to traders who do not want to update orders every day or multiple times a day. 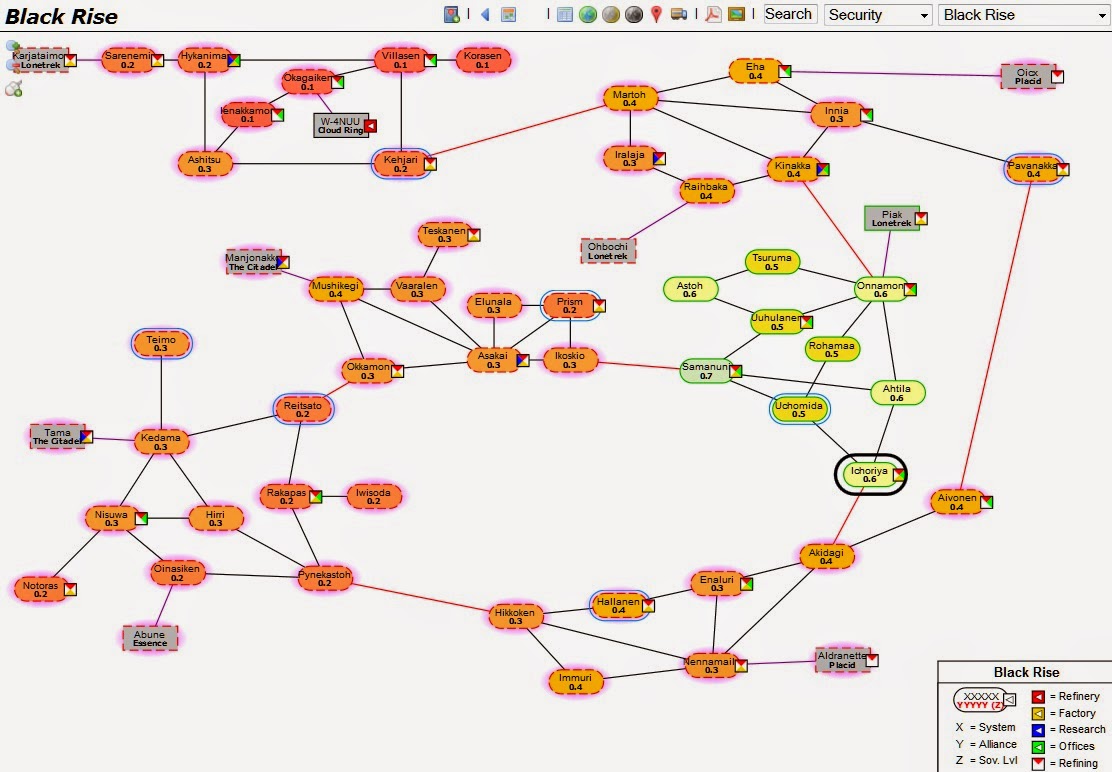 Well, for the first example, I am going to contradict myself and describe some of the success I had in a top-20 hub, though I no longer trade there. Ichoryia is a high sec faction war and low sec hub that serves the black rise and greater gal/cal mil warzone area. I lived there for a few months, and decided to put up around 100 orders as an experiment.The hub is, in fact, listed as the 14th largest trade hub in game by isk in sell orders, and 9th largest in total sell orders. And it is, in many ways, not a fun place to trade. First of all, it is only 10 jumps from Jita. Second and maybe more importantly, one does not have to pass through Uedama or Niarja (two of the main .5 systems where large-scale freighter ganking frequently occurs) to get there. As a result, for many commonly used modules, disposables, and ships, the market is fiercely competitive and sometimes equal to Jita prices. I often made decent isk in Ichoryia buying up low sell orders when the Jita prices spiked, such as on weekends.

On the other hand, if you can find holes in the market, you can set a fairly conservative 20% above Jita price and have the only order in the region, since Black Rise does not really have another large hub. Here's an example: I sold mining ships and mining equipment in the hub for a few months, as well as less frequently used small and medium ammo types. Items moved quickly and I had no competition as I had some of the only orders on the market. I made around 2-3b isk a month, updating orders once a week, during my few months trading there--not bad considering how easy it easy to stock in virtue of its proximity to Jita. A fairly old post about trading in Ichoryia, but still a helpful one, is over at Merchant Monarchy, and is definitely worth a read. The reason I mention Ichoryia in particular is because if I were starting from scratch in regional trading, I would likely start with this hub. The distance to Jita combined with the holes in the market--and the fact that you are less likely to get ganked on your way there than most other faction war hubs--make it a good hub for a new trader. 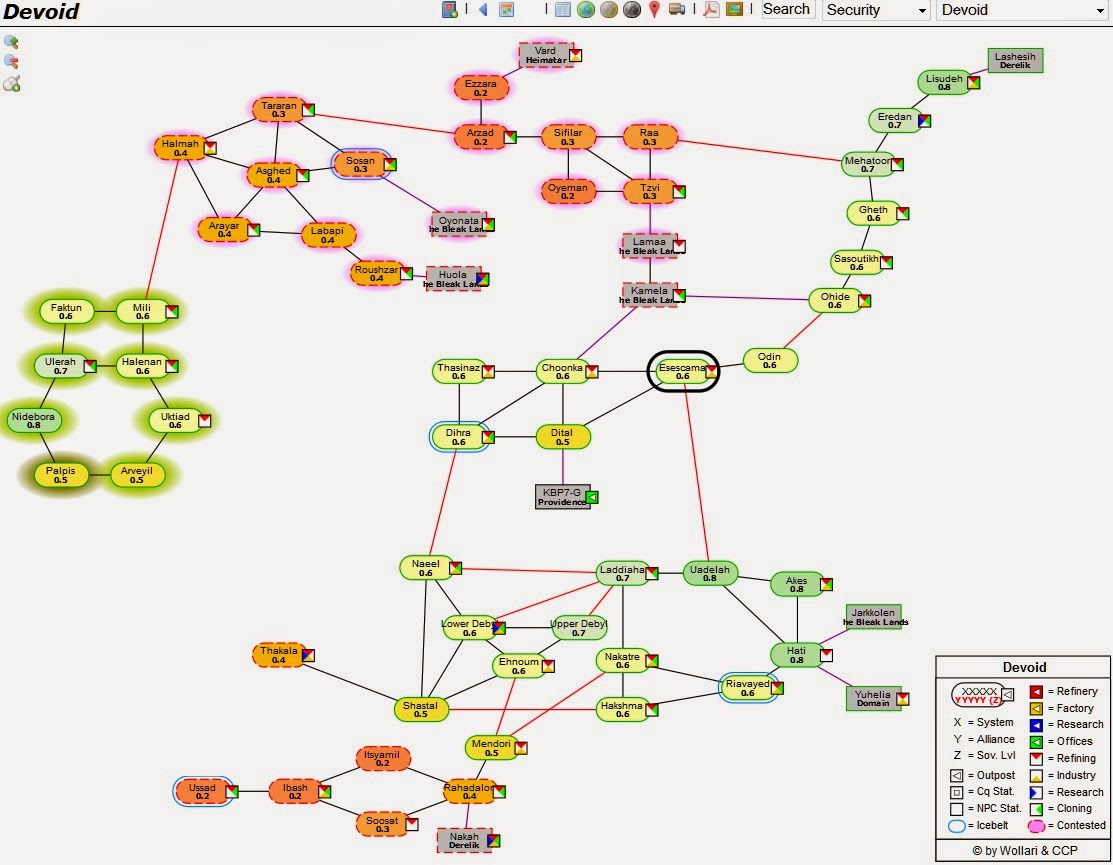 Esescama is, in many ways, similar to Ichoryia, in that it is (partly) a faction war space hub and is fairly active (in the top 30 or so trading hubs by isk in sell orders). However, the hub is peculiar in some ways, for one because it also serves to supply Providence (two jumps away) and also because it is not directly in the region that the most active faction war systems it is close to are in--Kamela and Lamaa in particular, both of which are in the Bleak Lands. I traded here briefly for the same reason I traded in Ichoryia briefly--I was living there to PVP nearby and using it as a place to reach both FW low sec as well as active null sec space. I actually don't know how this hub is in the top 30, as there does not seem to be a huge amount of activity there. Nonetheless, I quickly found holes in the market, such as common null sec ships. HACs and HICs, for instance, were sparse on the market at the time, and moved at a decent pace/margin. At only 9 jumps from Amarr, the market here is easy to stock and a good potential place to fill "holes" in the market that lack competition but get sales every week or so. 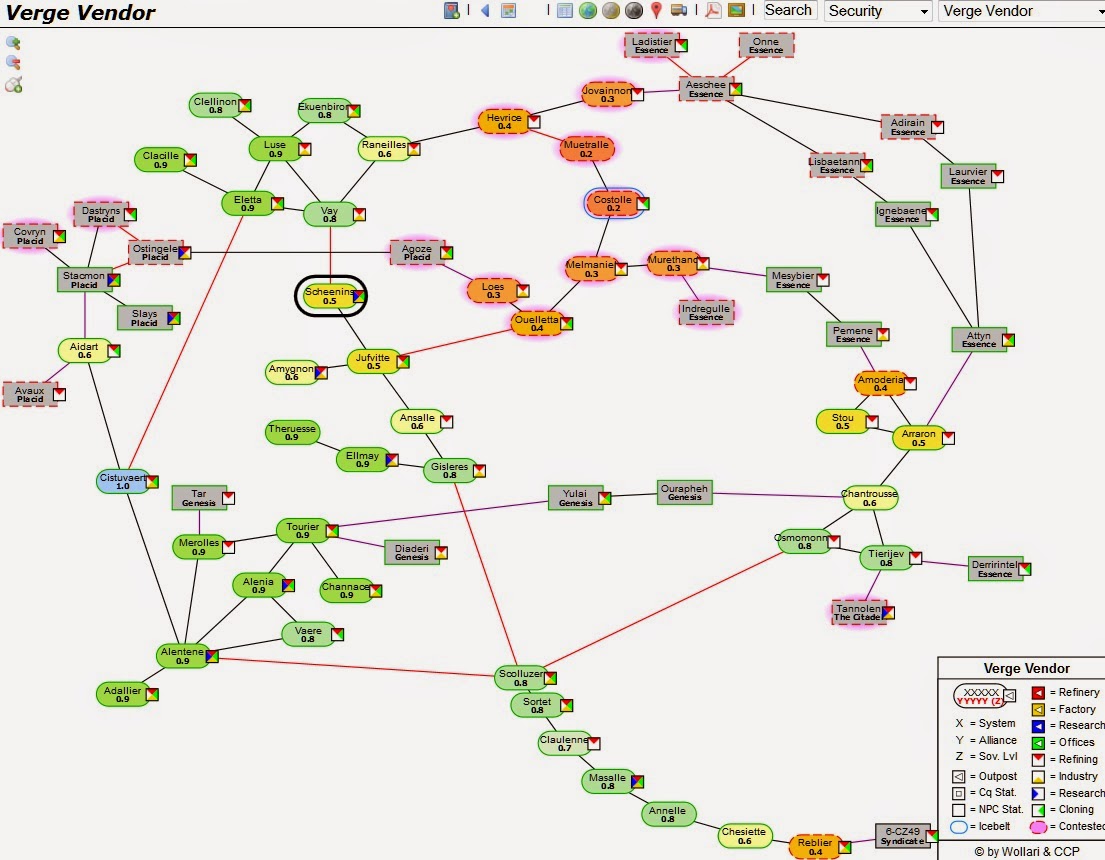 Verge Vendor is a highly active, mostly high sec region, but a headache to trade in due to the fact that there is not really a central hub or location, and Scheenins II - Moon 2 - Roden Shipyards Factory is actually all the way down at #7 in the largest hubs in Verge Vendor. However, unless you like trading in career agent systems (I don't, but they are always an option for potential trading) I think Scheenins is the best location in Verge Vendor. This is mainly because there are frequently over 40-50 players in system, as well as the fact that it is close enough to low sec systems to be worth stocking typical faction war PVP goods there as well. A lot of mining and missioning goes on in system and close by, making it good potential areas for those types of items as well. For instance, I often put up orders of mobile tractors and depots and have many sell before updating the order later when I can. Because goods are so spread out in the market in Verge Vendor, I don't worry about out-bidding orders a system or more away so long as my order is fairly close, and this worked well for common exploration, missioning, and mining goods. 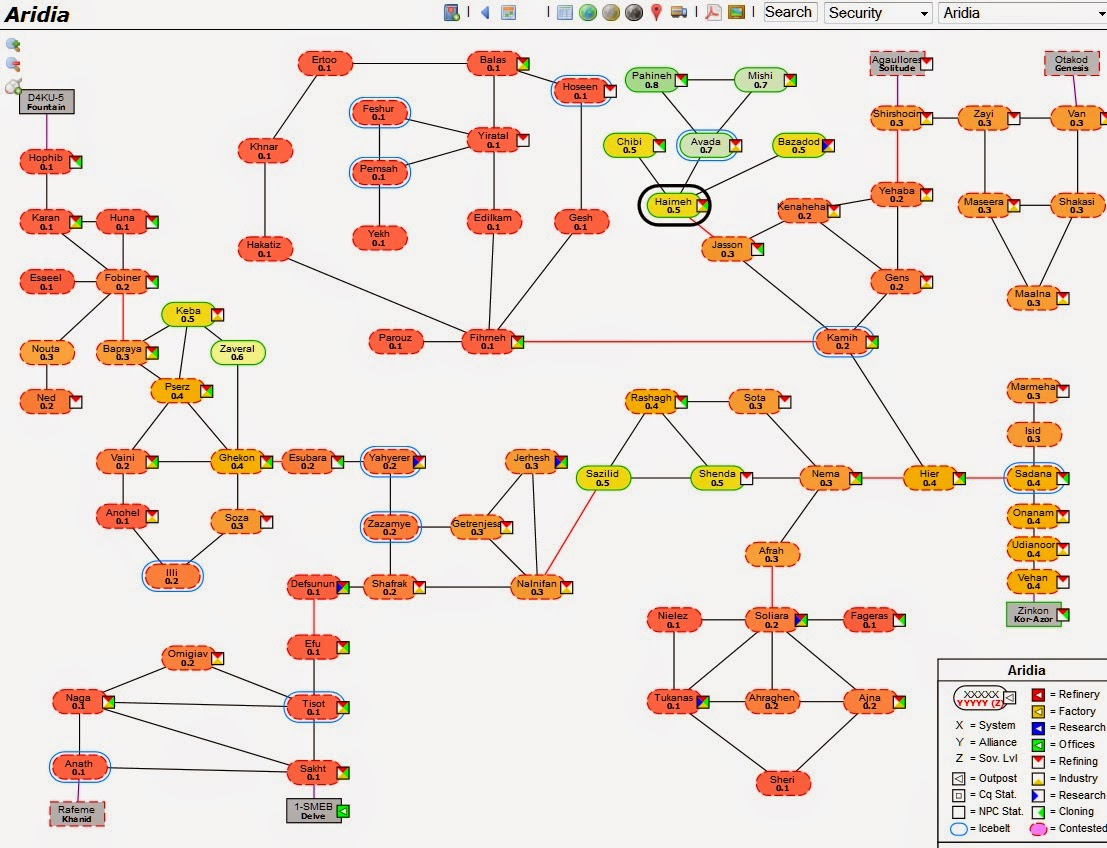 Haimeh is my last example but the one on this list I am most fond of. The main station there, Haimeh IX - Moon 11 - Ministry of Internal Order Logistic Support, is at a lowly 455 in the ranking of stations by total isk for sale. It is a "high sec island," and, to boot, a high sec island in the middle of one of the most desolate expanses of low sec, Aridia. However, Aridia is home to many explorers, as well as many more who frequently pass through, and there is a certain type of player in EVE who likes the seclusion of high sec islands (and being even more secluded than Solitude). So, naturally, I traded exploration items there, and they sold at a decent pace and very good margins. The other hubs in Aridia are also small, and serve primarily low sec or null sec players from what I've seen. Some are also occasionally home to station campers. I plan to eventually post about living in some of the "high sec islands" in game, a unique and incredibly relaxing play style in my experience. So, naturally, I traded in Haimeh initially because I was living there. Stocking the market was an issue. Bringing in some goods via blockade runner from high sec is an option, but not a great one since the system is so freaking far from any high sec hub. A better option is to bring in goods via wormhole to Haimeh or the neighboring systems. Not many players do this, so you essentially have the market to yourself even for stuff like some drones and common ammo types and exploration loot. Haimeh is one of the few places I managed to sell items as simple as Damage Control IIs for good margins and without much competition! That said, trading there is really only feasible if you are living there or nearby, which will only suit a very select group of players, if anyone, and you likely are not going to be making hundreds of millions of isk a day on average like you would in bigger hubs. Then again, you will also have to update orders less as a result, too.
Posted by Sven viko at 8:18 PM