Joining the Hype in Tribute

Today was a near perfect storm of conditions that in some ways officially starts the war against the Imperium. Out of game, many players have re-subbed to join in the war, and some are on spring break with the time to play during both of the EU-US timezones. A few timers in M-OEE8 came active at 20:00, a system that is symbolic for the Imperium as the gateway into the North and very close to Jita.

At peak, J-GAMP hit over 3,500 in local, but with the way the new Aegis sov works many other hundreds of players were fighting in other systems in the constellation at the same time. I watched many small gangs fight over command nodes spread out in the constellation, a very interesting mechanic Aegis brings from my perspective as a more solo/small gang PVPer.

M-OEE8 was at around 900 at the same time J-GAMP peaked over 3k, which is when I jumped into the largest fight of the day. Just as I was to jump in, one of the Imperium fleet trying to join their allies got bombed on the gate, losing something like 20-30b isk in Hurricane's, HFIs, and Slepnirs. 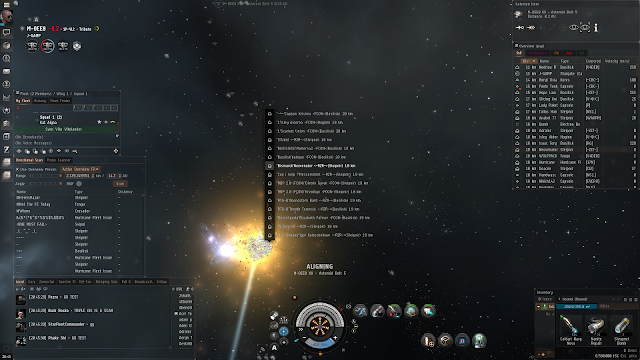 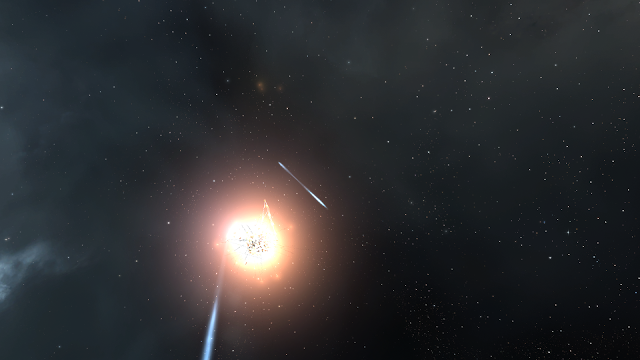 I joined the fight just as a third party, while also watching a live stream of the fight on twitch. I really lucked out with my timing--just as I jumped into J-GAMP the Imperium Mach fleet was 30k away getting pummeled. I got a bomb off just as PL. bombed and ended up doing over 50k in damage with one run and contributing to over 10b isk in ship destruction, including a Nestor kill which I believe is my first time on a Nestor mail. That's cool for me since I am still learning the ropes of bombing, and typically try to join these firsts as a solo party only to die horribly to a gate camp on the way there. Later in between work I did some solo PVP in the area in an interceptor, getting a few good fights against stragglers and people trying to loot the field. You do not have to join a corporation involved in the wars to actually get involved in these huge battles. Especially if you can fly a bomber, you can potentially contribute to these huge fights. Or at least get on kill mails if that is the sort of thing you care about. My total from the fight got a bit long!

Will the hype continue? It is really hard to say. I am personally very excited about the war and think it could do wonders for the health of the game, maybe even more long-term good than the epic B-R did. I don't have much interest in the political side of the game. I suppose my ideal scenario of the war would be to see the breakup of large coalitions, and in its place to see the North become much more comparable to the "thunderdome" that is the South, with dozens of largely independent corporations fighting one another. The North in EVE has simply lacked interesting PVP content in literally years due to the massive amount of blues and PVP stagnation in this region, and seeing it have more activity and local conflict would probably benefit everyone.

I mostly just hope that EVE will get a ton of PR from these fights which leads to an influx of new and lasting players. But I am curious to know how a few aspects of this war play out:

There's definitely a lot to be hyped about. The next month is going to be interesting, to say the least.
Posted by Sven viko at 10:07 PM