Statistics on Citadel, EC, and Market Hub Use and Ownership (and a small study)

tl;dr : over the past few months I've been collecting info on Citadel/EC use and their impact on the economy and conflicts in EVE. In short:
~ Don't read further unless you like words or are super interested in Citadel/EC usage statistics  ~

Citadels have now been in EVE for one year (the Citadel expansion having been released on April 27th, 2016). Engineering Complexes are newer, at only 6 months, but nearly already even more prolific. These new structure have completely shaken up the meta of living in space and generating content--and in some ways not for the good. I am interested in the stats for these structures: How much are they being used? How often are they being destroyed? Who owns them? Are they generating conflict, or stifling it? Do they make much money--and if so, who is making that isk?

Some of this info is fairly public--such as the number of new structured destroyed on zkill. First, then, we are going to look at stats CCP released at fanfest on new structure use. Second, we are going to look at the fantastic data compiled on Adam4EVE's structure statistics page. However, some of it is hard, if not impossible for mere players to acquire. For instance, ownership of structure and data on non-public Citadels and ECs.To try and get an overall picture that might answer some of these more interesting questions, I did a semi-random study on Citadel/EC use specifically in high security space.

Before I talk about the methodology and results, it is worth looking over the stats CCP shared about structure use during fanfest:

In terms of total structures online, a few things stand out to me. Raitarus are quickly becoming more popular than Astrahuses and should probably overtake them in total numbers in 4-6 months, and likewise for Azbels compared to Fortizars. Yet there is a surprising number of Fortizars online. At roughly 15b a piece, you are looking at a base value of over 18 trillion isk in just Fortizars in space as of March. Keep in mind that one of CCP's original goals was to make these new structures worth having, for almost every player or play style. Given the sheer number online thus far I would say they have succeeded (more on this later).

Networks of Citadels are increasingly common, especially as a way of safely moving capitals and jump freighters across the map. CCP has in the past voiced displeasure at how safely cynos work on Citadels, as well as with how overpowered tethering is (more on this later).

These numbers are probably to be expected. Citadels are super popular everywhere except LS, but even there they are fairly common. These numbers do not reflect where Citadels/ECs are destroyed, though. On any given day the majority of Citadels and ECs are destroyed in null, followed by wormhole space and LS, followed by HS last. The average in wormholes is roughly 1.2 per system, though obviously not evenly distributed (however, I've been hard pressed to find many wormholes without an Astrahaus in them lately).

So when we compare the number of structures online to the number destroyed thus far, do we get a balanced split? The cost and commitment of destroying these structures is in almost every case (barring trade hubs in systems like Perimeter) not at all worth it outside of WH space. An enemy Astrahus in null is a headache for attackers but a powerful staging platform for attackers or harassers. In many cases, all a staging Astrahus needs is a clone bay to perfectly function as a staging or move OP Citadel, making them even less worth being destroyed and less costly to deploy.

The final graph from fanfest is the most interesting. POSes apparently sat at 30% of all player industry in late 2016, but within just 2 months after release ECs had already surpassed that percentage. Since then, ECs have captured roughly 80% of player industry, and Citadels about 2% from the looks of it. "Legacy" industry POSes remain at 10% of player industry (this 10% from POSes probably represents a few LS capital shipyards with Thukker Arrays, which have not been replaced for ECs yet, and some industry POSes in HS that are running final months of jobs). The remaining industry in stations? A large majority of it is in Jita, and in career agent systems. (Career agent systems always have a high number of jobs per hour due to the industry career agents and tutorial.)

Let's look at one more graph, this one from March 2017's economic report: 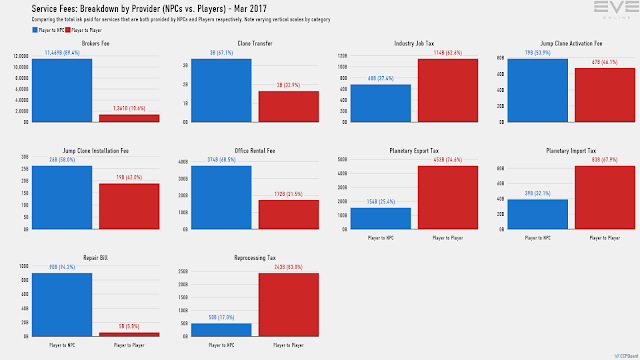 And here's the April chart for comparison: 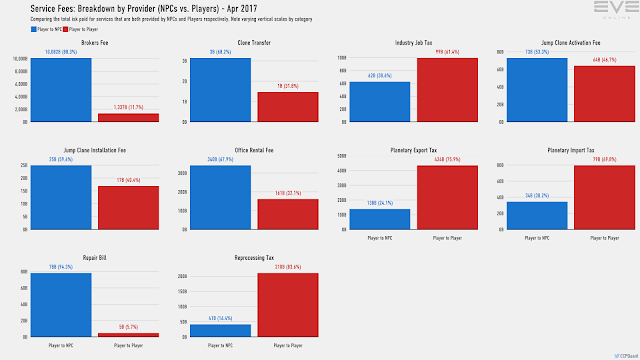 With the May chart slowing but still seeing an increase in player hub trade captured: 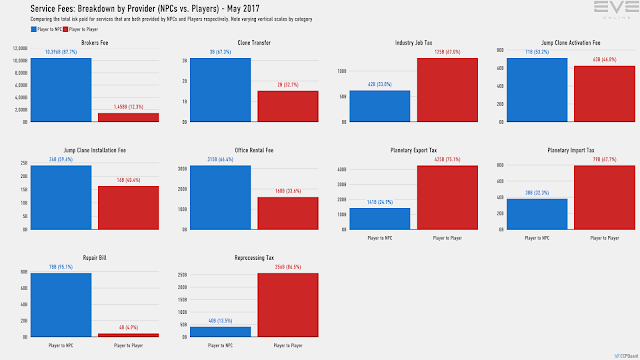 Though we still see some 90% of the brokers fee going to NPC stations, we also see 10-12%, or 1.3t-1.5t isk, occurring in player hubs. April saw a transfer of another 1% of broker tax to player hubs, and May 0.5%, and it will be interesting to see if that trend continues. We (think we) know (assuming the info is accurate) that market hubs in Perimeter can make around 300b per month in taxes, which is consistent with the economic reports. I would assume player market hubs all around Jita make at least 500b total per month, and hubs around Amarr another 100-200b. There are a few other player hubs in or near other systems, including LS and NS, that probably make another decent chunk of that 1.3t in March and, comparably, other months. This is one of the main questions I set out to get some evidence about: Where are the other player hubs, who owns them, who fights over them (if anyone), and what is the likely trade volume there? The other sources of service fees to players do not even approach the brokers fee even when all combined. Industry tax, clones, reprocessing, etc., together barely reach half of the market hub profit, even with nearly two-thirds of industry fees now going to players, industry is more of an incentive to get other players to use your market hub.

Let's first look at Adam4EVE's statistics on market hubs. Across all of EVE, there are around 450 public or semi-public Market Hubs in game, as of early May, 2017. The earliest ones date back to November, 2016, and the most recent were put up on the day this information was collected. The vast majority of these hubs are in High Security space. As of April, player markets are selling around 20t isk in sell orders and have up around 8t in buys. Interestingly though, a good half of all market hubs have no sell or buy orders at all, and just 10 or so have over 1k sell orders. Large isk buy orders are most popular--of course, meaning buy orders for PLEX and injectors. With few hubs having a large amount of sell orders, it is apparent that not many players have chosen to sell materials, ships, and equipment in player hubs on a large scale, but the overall trends suggest that sell order volume and isk amount are both increasing.

Adam4EVE's data is extremely useful and worth spending hours looking over if you're into that sort of thing (i.e. graphs), but it doesn't tell us some key factors about Citadel/EC market hubs: Who owns them? Are the majors hubs owned by a single cartel or is there evidence smaller groups own them? Do they get destroyed, or attacked, and what kind of isk do hubs outside of the Jita/Amarr areas make? Also, and not just for market hubs, how many structures are likely inactive? A significant amount of market hubs have zero orders--does that mean they are used for other purposes, or have their owners left EVE or taken a long leave?

A Small Study on Citadel/EC Use -
Methodology:

To get some evidence about these questions, I took a semi-random* sample of 50 systems in high security space and searched for all “Upwell” structures in each system (Citadels and Engineering Complexes). I recorded the name of the corp/alliance holding the structure, the number of players in the corp/alliance, and I also recorded whether the structure had any fueled services active (in cases where the structure had such info public, i.e., if the structure itself was public). (I also recorded upcoming vulnerability timers for ~non-scientific purposes~) I researched public databases (zkill and evewho) to see whether the corp/alliances are (plausibly) active or (possibly) inactive. I recorded every market hub and used Adam4EVE's data to record the number of market orders and share of the market volume in the system. Then, I came back to the structures one month later to see if their activity had changed (e.g., to see if structures that had active services still had them).

*About the sample: In order to get interesting results I excluded systems at both ends of the extreme range of high sec systems. I excluded from the sample systems one jump from Amarr and one jump from Jita, like Perimeter—a very special system—because the massive amount of upwell structures would highly skew the final results. I also excluded high sec systems that are in “high sec islands,” i.e. high sec systems that are cut off from the main body of Empire high sec by low security systems, and including Solitude. These systems are less popular but also attract a special type of nomadic player and I did not want this end of the range skewing the sample either. The final sample is basically “your average high sec system," The sample includes everything from systems with less than 5 jumps in the last hour I visited, to a few “mid/high-tier” trade hubs, to systems that border low/null security systems, to mission running hubs, and so on.

Alright, so what stands out to me is that only a tiny fraction of Citadels/ECs are getting destroyed relatively to the number put up. They are piling up fast and not generating much content at all. Just from the number of decently upvoted and commented R/EVE posts in the past month (May/June) there's a huge amount of dissatisfaction with Citadel/EC timer mechanics at the moment (1, 2, 3, 4, etc.). There's lots of proposed solutions but the general consensus is that the mechanics that stifle conflict are either 1) the 3-timer + off-timezone + damage cap system of destruction, or 2) asset safety, or both.

For 1), I think the solution is fairly uncontroversial. Citadels/ECs should use wormhole timer mechanics. 2 timers, back to back. Maybe Citadels/ECs in HS should retain the 3-timer system, and maybe Keepstars as well? Those are fringe cases, though. It shouldn't take 3-timers, in Aussie timezones with damage caps, across an entire week to destroy a single, undefended, 550m isk (R) / 950m isk (A) structure. Period.

For 2), In my opinion based on destroying Citadels/ECs solo and in groups (more on this in future posts), removing asset safety entirely would be justifiable, but perhaps too extreme. It would push too many players away from using Citadels/ECs (a bad thing) and toward NPC stations, driving players back to the safety of NPC space. However, even if asset safety stays outside of wormholes, more can be done to increase the incentive for players to destroy Citadels/ECs, and primarily: increase the salvage amounts, espeically relative to rigs, and/or make blueprints in build part of the drop/destroyed loot table. Base salvage should be increased, and if rigs are fit, salvaging should drop substantially more based on the material requirements for rigs added in. If something like 40-50% of base material costs dropped in salvage, destroying inactive structures would at least have a small isk incentive. Blueprints in use in the structure would make destroying industrial structures much like destroying labs/arrays in POSes, adding in the same risk/reward as the legacy system.

Phew, that was a lot of words. Upcoming (shorter!) posts in this series include my experiment in setting up a market hub as a solo player, and my experience destroying Citadels/ECs for potential profit (obviously, there isn't any) or fights (not much either!).